I remember it backwards.

Mrs Widds and I give our statements to the cop. I’m shaking but can think coherently. Mrs Widds is in ‘crisis management’ mode, feet firmly on the ground. I love that woman.

It feels like it takes forever for the police and ambulance to arrive, but in reality it’s only about half an hour. The cop asks for witnesses and thanks everyone else for their help.

Waiting is always the hardest part. The adrenaline fades and shock takes over.

Some idiot who’s probably had five minutes training in Med school flings his stethoscope round his neck, pulls the young woman passenger out of the car (first huge mistake) and asks if anyone has any Tylenol. What an idiot. Mrs Widds shuts him down.

A young guy gets out of the wreck wearing a shirt, underwear, and no shoes. He checks on his passenger then grabs his cellphone and pants. More people stop.

A couple of cars have already stopped and people are trying to help. I walk up the hill waving my arms, warning the cars and trucks in the slow lane.

Mrs Widds calls 911 and I make sure the trailer is secure. Chock the wheels. Not going to make that mistake aver again. Especially on a steep hill like this.

I pull over immediately, slam on the hazard lights. We share a look of horror, take a deep breath, and swing into action.

Mrs Widds is screaming something. I see the car. It’s going too fast on the inside lane. The driver loses control. In the blink of an eye it swerves back across three lanes of traffic, misses us by a few meters and crashes into the embankment.

Lets backtrack a little shall we?

When we left Dinosaur Provincial Park the rain and overcast sky of the day before had cleared and we had beautiful blue skies before us all the way to the Rockies. By the time we were back on Highway 1 storm clouds had rolled across the prairies and were taking bets on who would get to rain on us first.

We decided to drive straight through Calgary rather than take the bypass. (because we’d been so successful avoiding storms on the Winnipeg bypass) Visually it was a bit of a disappointment because cities seldom show their best side to the freeways dividing them in half. Still, we did avoid the storms. Those ones.

I saw a jagged blue smudge on the horizon and rejoiced. Mountains!

… and then they disappeared. Rainstorm!

Not a big one and soon it was blue skies (and big fluffy white clouds) all the way home.

This glacier used to come all the way down the mountain. 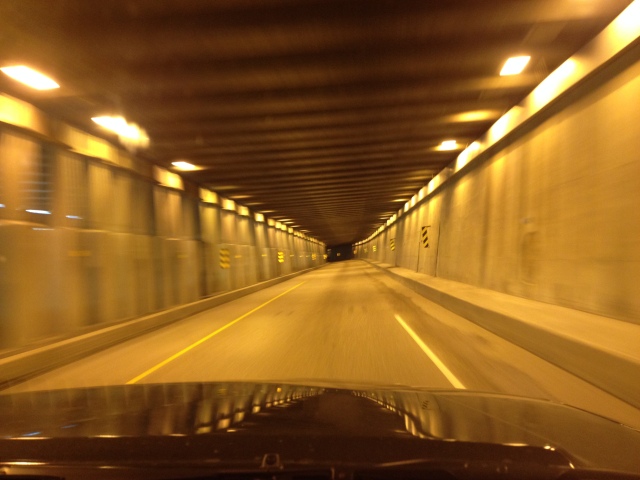 Inside an avalanche shed east of Golden

The accident happened about fifteen minutes east of Merritt. Stopping and helping and giving statements took a good chunk out of our afternoon travelling time, but we were back home on Widder Island in time for supper!

A couple of photos that slipped through the cracks …

I took this one at Mt Robson P.P. The way the trees grew reminded me of the rune, Mannaz – The Self. A great message to have at the beginning of our journey.

Ents of a different sort

We were in Sault Ste Marie (the Canadian one) in the midst of a sweltering heat wave when I see this sign.