Sounds like a great title for a science fiction story, doesn’t it?

But first, a picture of some blue sky… because I haven’t seen any for far too long, and there might not be any tomorrow …

Be still, my beating heart

Back yard – because you can’t have too much blue sky … with sunbeams!

Back to this singularity …

Good old Vernor Vinge,  (he of the great ‘Vernor’s Law’ (for writers)  which states that ‘all scenes need to accomplish at least 2 of 3 things: 1 – Provide background information, 2 – Develop the Characters, and 3 – Advance the plot’) first popularised the concept of ‘the singularity’ in a 1993 essay, (definitely worth a read if you’re interested in such things) wherein he posited that it signaled the end of the human or ‘Anthropocene’ era where human interaction with technology advances far enough that what we currently understand as ‘being human’ will cease to exist. (I’m paraphrasing, but that’s the gist of it)

My singularity was a little less … hmm .. grandiloquent. I have been singularly unmotivated to do anything, writing, blogging (just look at the last date I posted anything here) working on the Wunder-Lusters, cook, clean, or, on occasions, get out of bed.

I’m blaming it on the weather. Rain, to be precise. Four  months of unrelenting rain, broken only by momentary spells of not-rain.

See that photo of the Winter Tree at the top of this post? All that green stuff isn’t just grass, it’s grass sitting on top of ankle deep mud just waiting to suck down the unwary into it’s watery, sludgy depths.

As much as my intellect understands that living through extreme weather events is now an irreversible fact, my ability to engage with their subtler consequences dug in its heels and refused to budge.

My world became smaller and smaller, old habits, old expectations, based on decades, generations even, of ‘knowing’ what the weather was supposed to be like at this time of year, clung to me even as they were being scoured away by abrasive realities.

It didn’t help, of course, that what we’re planning to do with the Wunder-Lusters will turn just about every single aspect of our lives upside down as well. There was some serious digging in of heels there, let me tell you.

So there I was, circling the drain of ennui, inertia, and false expectations. Slowly, inexorably moving toward that point, that unmotivation singularity, where I’d … well, to put it bluntly, disappear up my own bum.

I didn’t, thankfully. And it wasn’t as though I was struck by some magical mystical bolt of cosmic goo, or a great revelation lit up the inside of my skull.

It was just… a moment, in time … that stayed with me for no longer that a single breath … and then, I was on the other side. 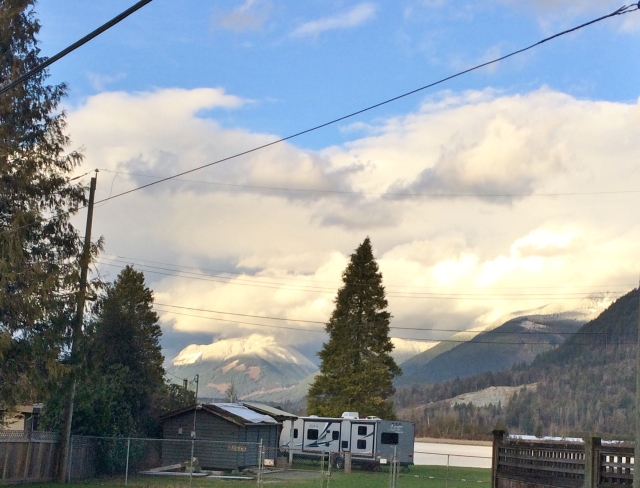 More blue sky, from the end of our road, and SNOW (If only we were three or four hundred meters higher – le sigh)

Upon re-reading, I see that I’ve confabulated my past and present tenses (bad writer) but really, it’s the singularity’s fault.

P,S, I’ll be waffling on, with more detail, about what we’re up to with the Wunder-Lusters in my next post.

31 comments on “The Unmotivation Singularity”