Prairie roads are straight. Some of them disappear over the horizon without a turn. Some of them veer ever so slightly to the left or right then resume their arrow-like focus. Some of them intersect with other roads at precise geometrical angles.

The only time I was truly thankful for their straightness was driving through the many storms we encountered along roads that were under ‘deconstruction’ and reduced to narrow pylon-sided avenues – shadows of their former wide open glory. I could plough through the torrential downpours at a snail’s pace secure in the knowledge that there wasn’t a corner to negotiate until way over on the far side of the storm cell.

We’d been on the road for 28 days and coming up on the final adventure of our trip. Neither of us spoke about it but we didn’t want our nomadic wanderings to end. We had our new way of life, physically hard though it was, and the seeming ordinariness (and a different sort of hard work) of our everyday lives felt as though they belonged to other people.

Still, as we gassed up in Medicine Hat for a short-ish jaunt to our next campground, we pushed that subtle melancholia aside and focused on the moment.

The fields on either side were flat, stereotypically Prairie flat. Dry and nary a sign of life except for the vaguely animalistic oil rigs shimmering in the distance.

The flatness was getting to me. It had been fascinating to see such a different landscape than what I was used to on our first crossing of the Prairies, but the luster of the unknown had worn off. I ached to see something on the horizon other than the curvature of the earth.

I missed my mountains.

So, I wrote a creation myth story about this person who went mad on the plains and dug up the earth to break the monotony of the scenery. She piled up all the dirt and created the Rockies and coastal mountain ranges. The channels she dug the dirt out of created the long gash in the land we were fast approaching, Dinosaur Provincial Park.

A gap in the world

I got my wish. The horizon wasn’t featureless and we weren’t in Alberta anymore. We were under it.

Driving down through 100 million years of history 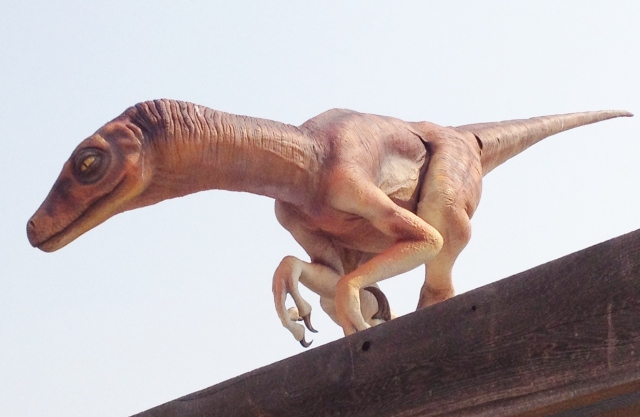 Welcome to MY world

As usual we were setting up camp by late afternoon, but we were done in time to boil the kettle, make a cuppa, and watch the sun go down behind the ancient plateau.

The relentless hot dry wind evaporated the sweat off our skins before it had a chance to cool us. There was no comfort to be found until the sun had set.

I could understand how easily and quickly people died out here.

The next morning we were up at the crack of 9.30am and hit the showers.

Showers. Let me tell you about showers. Of all the campgrounds we stayed at only three out of the seventeen were adequately set up for people with disabilities. I wasn’t looking for a great deal; maybe a bigger stall with a secure handrail, a stable seat, and a non-slip surface to stand on. It’s not rocket science! These amenities may seem small but they make a huge difference to the time I have to spend making sure I don’t fall and not stressing my body any further.

The path to the park center – a dinosaur pyramid or erosion?

The sun was a scorching ball of fire in the sky as we started exploring the area. (with water bottles firmly in hand) A mysterious aroma wafted by on the wind. Sweet sage. There were bushes here older than Methuselah’s grandma. 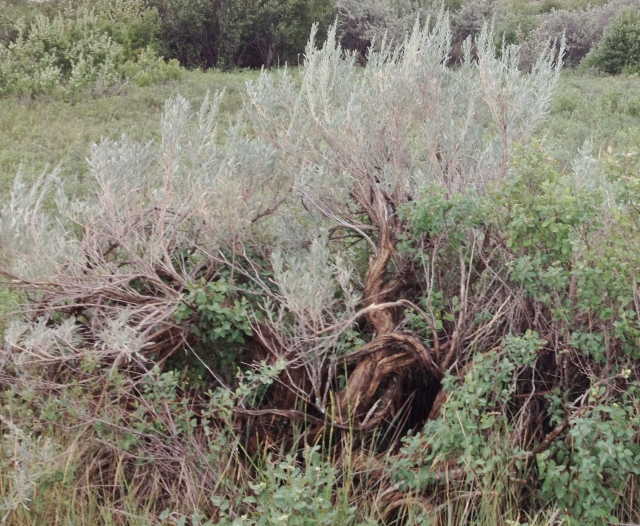 Do not call me ‘Granny’

The scale of things is deceiving. Is this formation 3 meters high or 30?

Then it became too darn hot to do anything. Siesta time.

On our way back to camp we checked in at the park center and learned a storm was predicted for the next day. Well, colour me surprised and call me cynical, but, really?

A ginormous growly storm did roll in before sunset, and rolled away again. I’m not going to say we didn’t feel like, ‘pssh, is that all you got?’ but after all the storms we’d been through that one did feel a little underwhelming.

It was time to haul out the long pants and warm sweaters. We also carried those bright red rain poncho’s we’d bought in Niagara Falls, just in case.

70% of the park is off-limits to the public to protect the fragile environment, but the other 30% has several interpretive trails that meander up and through and down and over some of its more striking formations.

The path goes ever onward

And then the heavens opened.

Taken from underneath a poncho. This little rivulet wasn’t here a few moments ago

The land is so dry that when it does rain the water just chews at it and creates it’s own channels down to the Red Deer River. 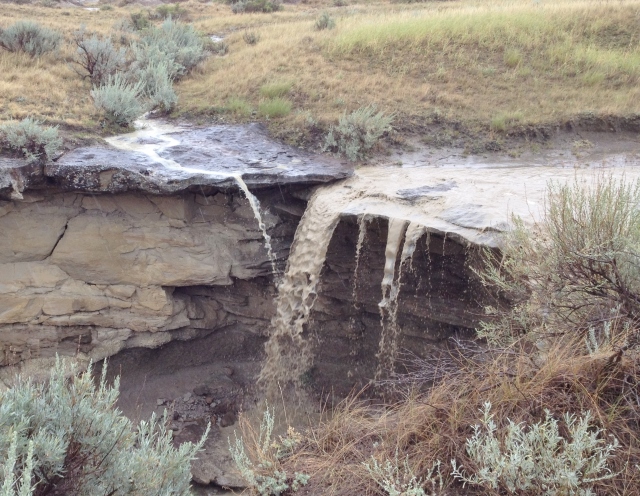 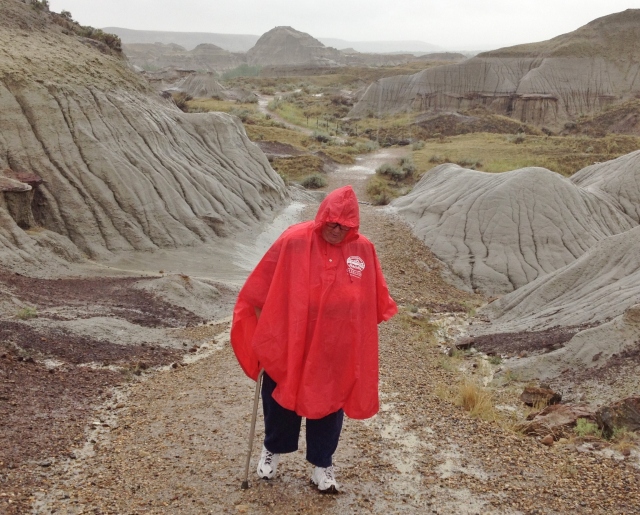 Hobbit trudges up the hill, in the rain …

Mrs Widds, in trying to get a better shot walks backwards and slips and goes splat in the mud. Unhurt. The moral of the story is; never walk backwards in Dinosaurland.

Hobbit trudges down the hill, in the rain … no splats this time

The path was getting a little treacherous because yesterday’s dust was now today’s mud. Not your ordinary mud either. This was volcanic ash mud. The kind that expanded when wet and gave no traction whatsoever. It was like walking on ice 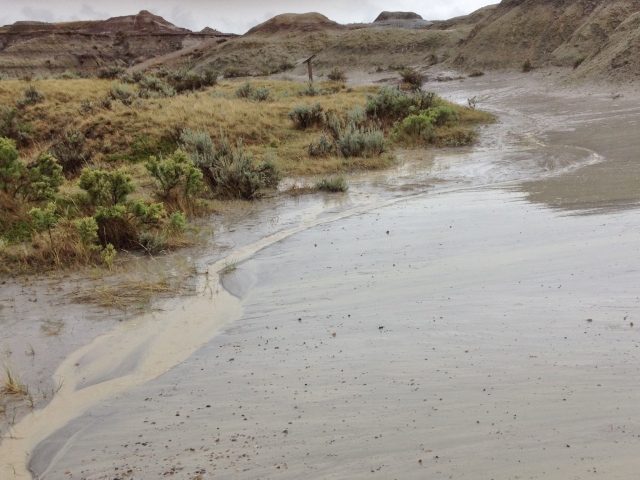 Do not walk on the nice shiny grey bit 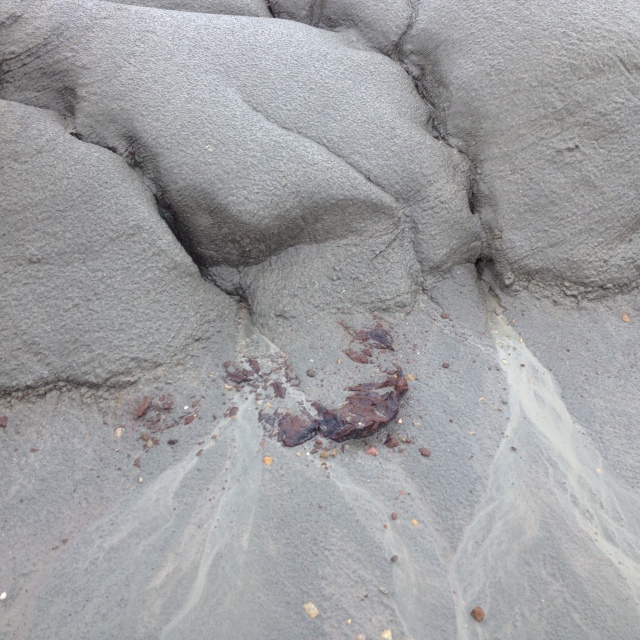 Water oozing out of the rock. Time to head back

In the name of rescuing me and in pursuit of some of these pictures, Mrs Widds slipped on the frictionless mud several times before we reached the end of the trail 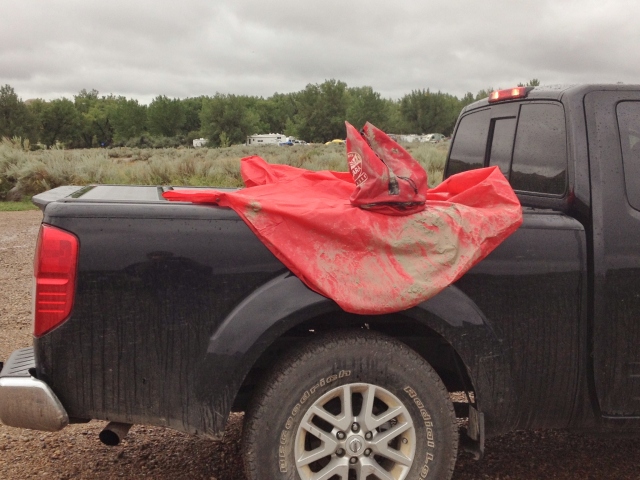 Why is this called Dinosaur Park? Because of these …

40 different species have been discovered here – and counting

I stared through the protective glass (why the picture is a bit blurry) at the last mortal remains of a creature so ancient I couldn’t begin to imagine the world it must’ve inhabited, and I felt a chill. Perhaps it was that feeling our species still experiences in the presence of a predator. A little ape-like creature cowering back into the trees as giant shadows sweep across the grasslands looking for their next meal.

The Red River floodplain, where all that water and silt ends up, is home to a stand of cottonwoods.

This venerable Grande Dame is over 250 years old 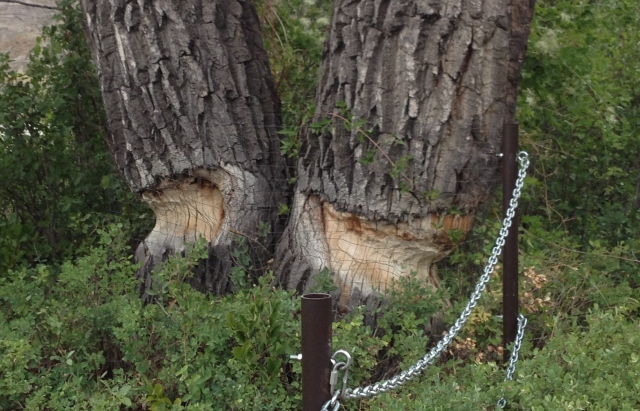 Nom, nom, nom … beavers have no regard for venerable 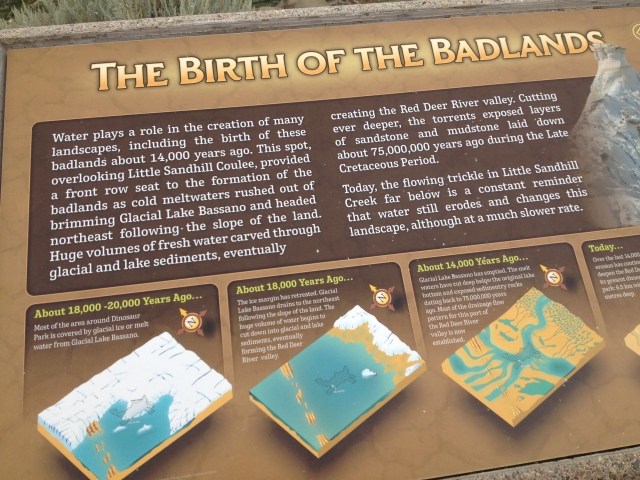 Little Sandhill Creek … aka, the little creek that could

The vista goes on as far as the eye can see.

We reached that stage of our journey where we started cataloguing ‘lasts’. The last shop for groceries, the last prairie town, the last storm – hah! Who was I kidding?

Next: One More For The Road

* Birth of the Badlands*

‘Water plays a role in the creation of many landscapes, including the birth of these badlands about 14,000 years ago. This spot, overlooking Little Sandhill Coulee, provided a front row seat to the formation of the badlands as cold meltwaters rushed out of brimming Lake Bassano and headed northeast following the slope of the land. Huge volumes of fresh water carved through glacial and lake sediments, eventually creating the Red Deer Valley. Cutting even deeper, the torrents exposed layers of sandstone and mudstone laid down about 75, 000,000 years ago during the late Cretaceous Period.

Today, the flowing trickle in Little Sandhill Creek far below is a constant reminder that water still erodes and changes this landscape, although at a much slower rate.

About 18,000 – 20,000 Years Ago … Most of the area around Dinosaur Park is covered by glacial ice or melt water from Glacial Lake Bassano.

About 18,000 Years Ago … The ice margin has retreated. Glacial Lake Bassano drains to the northeast following the slope of the land. The huge volume of water begins to cut down into glacial and lake sediments, eventually forming the Red Deer Valley.

About 14,000 Years Ago … Glacial Lake Bassano has emptied. The melt waters have cut deep below the original lake bottom and exposed sedimentary rocks dating back to 75,000,000 years ago. Most of the drainage flow pattern for this part of the Red Deer valley is now vanished.’

Note from tour guide info – there’s an alternate theory that the badlands were carved in one catastrophic flood that occurred when a natural dam holding back the Lake Bassano meltwaters, probably glacial moraine, suddenly collapsed. I wouldn’t’ve wanted a ringside seat for that one!

17 comments on “Close Encounters of the Cretaceous Kind”